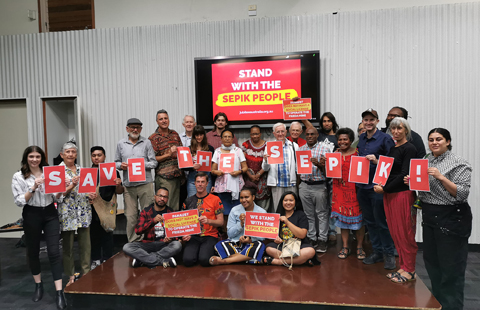 SAVE THE SEPIK RIVER WITH HUMAN RIGHTS DEFENDER EMMANUEL PENI

Join us in Meanjin/Brisbane for a very special evening with Emmanuel Peni, a human rights defender and co-ordinator of Project Sepik. He has travelled a long way to tell you a story about the fight to keep one of the last uncontaminated river systems in the Asia-Pacific region free of large-scale mining led by outside actors.

The event is free, so grab a friend or two and come along to what promises to be a special night where you can hear directly from a passionate activist at the frontline of climate justice.

Please share the event with your Meanjin/Brisbane friends – together we can build international solidarity for the fight to save the Sepik River.

BACKGROUND INFORMATION: The Frieda River Mine and the Threat to the Sepik River

The Chinese-owned Australian incorporated company PanAust has plans to build the Frieda River Mine - a huge copper and gold mine in Papua New Guinea just upstream of the mighty Sepik River, one of the largest uncontaminated freshwater wetland systems in the Asia-Pacific region.

If approved, the Frieda River Mine could severely damage the important Papua New Guinean river, and with it the 400,000 local people whose livelihoods depend on it.

As a response to this, Emmanuel Peni started the PNG-based community group Project Sepik together with some of his colleagues. Project Sepik advocates for the vision of a local environment with a sustained balanced of life, and they have a number of concerns relating to the proposed mine, including riverine tailings disposal risks, environmental impacts, social impacts and problems around Free, Prior and Informed Consent.